“Move Along Nothing To See Here” 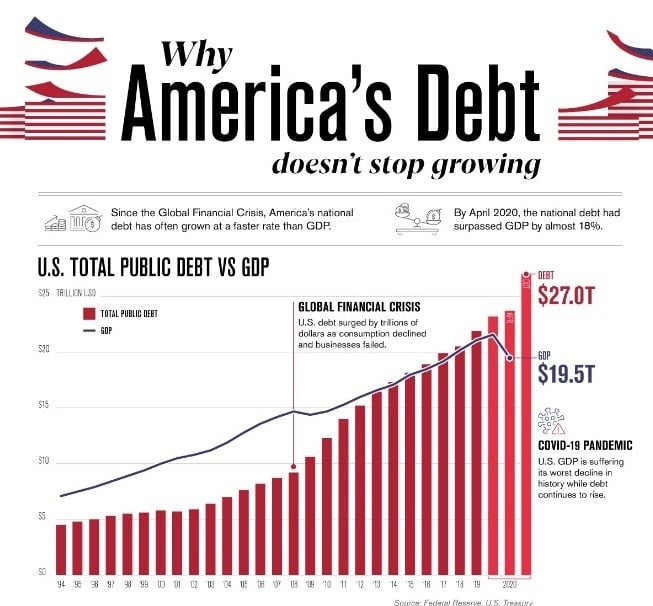 “Move Along Nothing To See Here”

At least Washington D.C. wants you to think that. I am writing this the week before the election; it is still late October 2020. However, it will not be published until after the election because if we tried to put this out on Facebook, Instagram, Twitter, and Google, it would get rejected. Shame on them! This is the debt we all owe. Do not think you are exempt from owing this, you are not. If you look at the last vertical bar on the top graph, you will see how much the covid-19 epidemic is costing us. Notice the decline in the GDP (Gross Domestic Product). It was keeping pace with the huge spending of our Federal Government pretty much. Not now.

The second graph shows how much more we (the Government) spend than we take in every year, except from 1998 to 2001. Remember that it is the House of Representatives that sets spending, not the President. We all love to blame Presidents for loading us up with more dept than we can afford, but they are only part of the process, not the whole problem.

15% of the Federal Income is made up of Corporate Taxes and excise taxes plus customs and duties. In this group are tariffs on goods from foreign countries. We need to increase tariffs.

Why are we continuing to outspend our revenues? You can break it down to the last two economic catastrophes. In 2009 the American Recovery and Reinvestment Act spent $787 Billion. Now in 2020, our CARES Act already has spent $2 Trillion and we could spend even more. These were emergencies and the spending was mostly above what was already programmed. Also, revenues fell.

To stop the debt from literally destroying our economy and putting us in a massive crisis that would make both the housing crisis and the covid-19 crisis look small, we need the Federal Government to do two things. Increase revenue, and limit the growth of expenses. No one is advocating cutting programs, but we spend on Health Programs (Medicare and Medicaid), Social Security, plus Federal retirement for civilian and military $1.4 Trillion. The Payroll taxes designed to pay for Social Security, Health programs, and the Federal retirement program has revenue of $1.26 Trillion. Are we as a country willing to increase our payroll taxes to make up the $140 Billion difference? If 250 million people are working that is an average of reducing your take-home pay by $280 each year. The other $280 will come from the employer per employee so don’t expect a wage raise soon.

The point I am trying to make is that we cannot expect the 1%ers to make up the difference. They are not consuming most of the Federal Expenses. Still, there are some things that can be done to make high-income earners “pay their fair share”. Here are three ideas. 1. Do not repeal the limit on Local and State Taxes 2. Remove interest exemptions on any residences other than one home and houses which are not rental properties. Making employees and board members take the full actual cost of travel if provided by the company or anyone else as income. These simple moves will help increase taxable income from High-Income Earners. But when all is said and done, the majority of the increase will come still need to come from the majority of the people earning income.